Battling Typhus in the Warsaw Ghetto

Historical pandemics and how they were managed are of great fascination to us today, for some reason I forget. This Background Check features a recent study of an epidemic of typhus in the Warsaw Ghetto of WWII Poland, which local leaders were able to completely suppress, despite horrific conditions and active attempts by the Nazis to allow the disease to flourish.

In the July 24, 2020 issue of the open-access journal Science Advances, an international team of mathematicians, computer scientists, and historians led by Israeli biomathematician Lewi Stone reports on an outbreak of typhus in Poland during World War II. In documents preserved from the infamous Warsaw Ghetto, the team discovered statistical evidence that the Jewish people interned there very nearly eradicated typhus from their community, despite the sustained efforts of the German federal government to make those efforts fail. 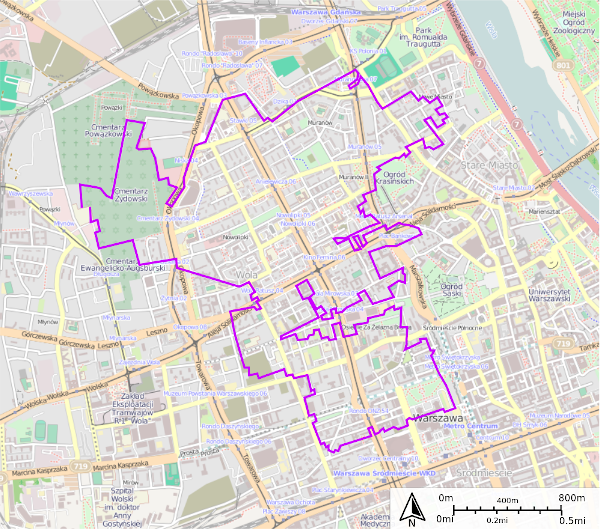 Plan of the Warsaw Ghetto overlying modern map of Warsaw


Typhus in the Warsaw Ghetto

In 1939, the Nazi occupiers of Poland evicted all 400,000 Jews out of their homes in Warsaw, crammed them into an area of 3.4 square kilometers (about 1.3 square miles), and built a massive wall enclosing them in. The Warsaw Ghetto was a city within a city, five to ten times denser than the densest city in the world. A major pretext for the Nazi sequestering (and eventually liquidating) the Jews was the typhus epidemic then prevalent in Europe: Nazi Germany was obsessed with the disease and phobic of epidemics in general, and blaming the Jews for typhus gave the Nazis an excuse to lock them away.

The typhus pandemic did spread through Europe, and it did infect Germany and it did, with the explicit help of the Nazis, infect the people in the Warsaw Ghetto. But in the Ghetto, and despite the efforts of Nazi Germany to make the situation as bad as it could possibly be, a surprising thing happened: the curve didn't just flatten, it cratered.

How Did They Do That?

Typhus is a disease that is spread by human body lice, and the conditions in the Warsaw Ghetto were designed to make that worse: People forced into tight spaces, no garbage removal, bad and limited food supplies, and an influx of new, sickened people from the Polish countryside all conspired against the prisoners. Yet, Stone and colleagues present data showing that when a major epidemic outbreak occurred in October 1941, it was rapidly suppressed.

According to documents in the Ringelblum Archive, the community put their faith in the scientists and rabbis who had been interned with them, including Ludwik Hirszfeld, a Polish immunologist who survived the Ghetto and went on to be nominated for the Nobel Prize. “...Typhus was created by the Germans, precipitated by lack of food, soap, and water, and then—when one concentrates 400,000 wretches in one district, takes everything away from them, and gives them nothing, then one creates typhus. In this war, typhus is the work of the Germans," wrote Hirszfeld.

In the ghetto, social self-help and medical organizations took the lead in health education and hygiene, and scientists gave hundreds of public lectures covering public hygiene and infectious diseases. An underground university was set up to train young medical students, and scientific studies of the phenomena of starvation and epidemics were undertaken. Building and apartment cleanliness was encouraged, as were social distancing and home self-isolation. Complex and highly elaborate sanitation programs and measures were developed.

A rate of 3,500 recorded cases in October 1941 (although the true number of cases was likely four to five times higher) had all but disappeared by the onset of winter. This amazing success story ended in July 1942 when the Nazis abruptly emptied the Warsaw Ghetto and moved the now-typhus-free population to the Treblinka death camp.

Stone and colleagues based much of their research on the Ringelblum Archive, the historical notes created by the research group Oneg Shabbat led by the sociologist, historian, and political activist Emanuel Ringelblum, all of whom were interned at the Warsaw Ghetto.

At the beginning of World War II, Ringelblum decided to create an underground archive of the lives of Jews in Warsaw and other cities during the German occupation. He had earlier worked on another such project at Zbaszyn, where Polish Jews expelled from Nazi Germany were interned, but all those documents were lost during the war.

Three out of ten metal boxes and two milk cans in which the Ringelblum Archive was hidden. From 'Martyrdom, Struggle, Extermination of Jews in Poland 1939-1945,' Publishing House of the Ministry of National Defense, Warsaw 1960, photo no. 150.

In the Warsaw Ghetto, Ringelblum assembled a group of between 50–60 journalists, economists, teachers, writers, and rabbis who called themselves "Oneg Shabbat," or "Joy of the Sabbath." They met each Saturday to collect an enormous variety of documents: German orders and ration cards, underground ghetto press, reports, personal letters and diaries, poems, and literature.

They were well aware that they would likely be killed in the end: Grim news from other Jewish groups in Europe trickled in. In the end, only three of the Oneg Shabbat membership survived the war: economist Hersz Wasser, his wife Bluma, who was involved in teaching Hebrew, and writer Rachela Auerbach.

The group hid their documents stored in milk cans and metal boxes buried in different parts of the ghetto. One part was found in 1946, a second in 1950, and a third part has not been found. Today the documents are archived in Warsaw in the building where the Oneg Shabbat worked together in the ghetto, now the Jewish Historical Institute.

One thing we modern folk can learn from the Warsaw Ghetto leaders is that an epidemic can be successfully reduced and managed at the local level. Local leaders worked with the population to explain the significance of the disease and to teach them how to recognize the symptoms, take care of the ill, and prevent themselves from further infections. It was a community effort that did in the typhus, driven by the direct flow of information from community leaders to the community at large.