A new study on the genetics of the New Guinea Singing Dog holds the promise of improving the chances of the rare breed's survival. This Background Check discusses the NGSD, and the implications of the new discovery of a previously unknown population of related Wild Highland Dogs. 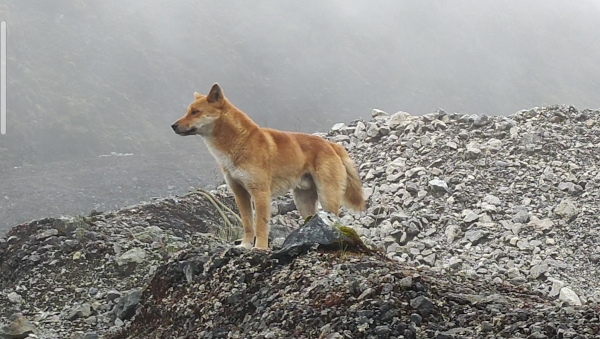 What is a New Guinea Singing Dog?

The New Guinea Singing Dog (NGSD) is a breed of domestic dog, a small dingo which until recently was known only from captive breeding groups. Dingoes are domestic dogs that originated from East Asia, arriving at least 3,500 years ago, probably about 5,000 years ago as companions to people.

Compared to other dingoes, the NGSDs have shorter legs and a broader head. They are dark chocolate in color at birth and change to light brown by six weeks. Adult NGSD coats are varied and colors include brown, black, tan, ginger, and russet. Their breeding season starts in August and wild pups are born beginning in December.

They are called singing dogs because at daybreak and dusk they howl in chorus, a characteristic harmonic vocalization which is described as a wolf howl with overtones of whalesong. NGSD singing is believed to be a communication method used to keep far-flung packs in touch with one another—which in retrospect has been rather sad since the different conservation packs are in different countries.

Until now, there were thought to only be between 200–300 NGSD in the world, scattered in breeding collections in different countries. All of them are descended from about eight founder dogs collected from New Guinea herders in the 1960s and 1970s. Various taxonomic schemes have been proposed, but in the end, NGSD and dingoes are domesticated dog breeds, not separate species, and as such, they are all properly thought of as Canis lupus familiaris.

Because of the taxonomic issue, they couldn't be assigned endangered species status, but specialists have still been concerned about the conservation status of the breed.

The news report issued on August 31, 2020, in the Proceedings of the National Academy of Science by Indonesian biologist Suriani Surbakti and colleagues, describes a newly discovered pack of New Guinea Wild Dogs living in the mountains of New Guinea. The pack of about 15 dogs was discovered by the New Guinea Highland Wild Dog Foundation and the University of Papua.

There are genetic differences, stemming from the decades of isolation of the NGSD, but in the main, they are closely related to the NGSD and can be used to support the captive populations of NGDS.