Greenland Ice Melt Highest in 12000 Years and Why That Matters

The Greenland Ice Sheet (GIS) is made up of multiple glaciers that have covered the island of Greenland for millions of years. According to a study published on September 30, 2020 (Briner and colleagues 2020), over the past two decades, Greenland has been experiencing mass wasting of the ice on its western side at rates not seen since the Early Holocene, 11,600–7,000 years ago (ca. 10,000–5,000 BCE). In the Early Holocene when Greenland's ice wasting was similar to what it is today, humans experienced many unpleasant upheavals—sea level rises, coastal flooding, temperature rises, meltwater pulses—some of which are discussed in this Background Check. 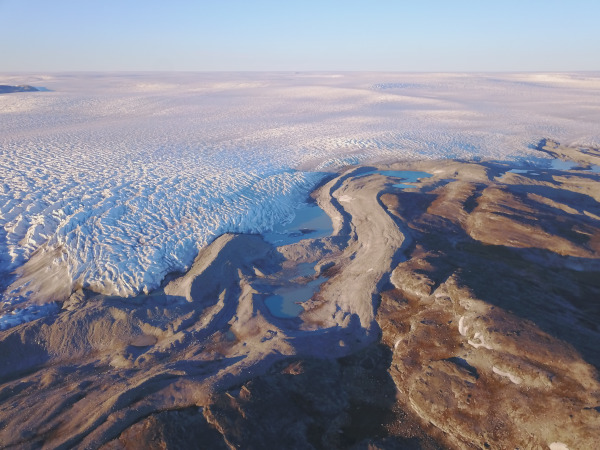 Greenland is one of many locations near the Arctic and Antarctic poles and on mountain tops where water is stored as ice on our planet. Ice and snow were precipitated onto these areas and today Greenland's ice is between 2,000–3,000 meters (6,600–9,800 feet) thick. Ice coring, invented in the late 1950s, involves pushing long narrow tubes into the ice to draw out samples, which can be dated by direct counting of annual layers within the ice. Information gleaned from the cores has come from a variety of physical and chemical analyses. One strategy involves examining frozen bubbles that contain ancient trapped gases such as carbon dioxide and methane. Studying the content of the ice layers in all these places, scientists have been able to gauge the earth's temperature, precipitation, atmospheric composition, volcanic activity, and even wind patterns going back more than 100,000 years.

The ice cores are cut into meter-long segments and kept in special storage facilities, such as the National Ice Core Lab in Denver, Colorado, where they are maintained for visiting researchers. Over the past few decades, much of the focus of ice core analysis has been on tracking the receding glaciers, since the mass loss of ice has been directly associated with global climate change, in particular the rise in temperature and sea levels.

The Holocene is what geologists and archaeologists call the period in which we live right now. It began with a warming period at the end of the last Ice Age about 11,600 years ago. As the continental ice receded, the climate changed. The Early Holocene is when humans completed the colonization of the Americas, and by 10,000 years ago, the first animals and crops were domesticated. All over the earth, people built homes, grew crops, expanded the population, and began to live in ever-growing communities.

Data from ice cores from the Greenland Ice Sheet, as well as other glaciers, has provided environmental information about the Holocene. What seems to be clear is that the early Holocene was very active climactically, with many warmer and cooler periods, but that after about 7,000 BP, the climate, temperature, and sea-level became relatively stable, and the earth's climate has remained more or less stable (with some short-term exceptions) up until the end of the 20th century. 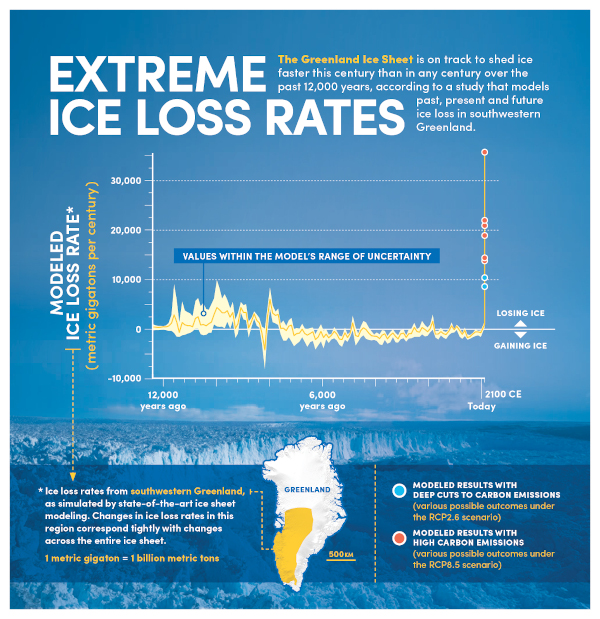 According to the 2020 report in Nature, U.S. geologist Jason P. Briner and colleagues built a high-resolution ice sheet model based on data from ice cores in the Denver NCIL. Their model, based on the first 20 years of the 21st century, shows that the GIS is on track to lose 6,100 billion metric tons of ice melting before 2100. That level of wastage is higher than that experienced during the early Holocene between 11,600–7,000 years ago.

During that 4,600 year stretch of the early Holocene, the GIS experienced a loss of approximately 6,000 billion metric tons per century, a temperature change of about 15 degrees centigrade in the first 1,500 years alone, and a rise in sea level of about 60 meters, or nearly 200 feet. That works out to about one-half inch every year—the current rate of sea-level rise is one-eighth of an inch. But the rise wasn't consistent year over year.

During the early Holocene, the planet experienced several meltwater pulses (MWP), periods when the sea level abruptly rose at rates estimated between 4.5 and 28 meters (14.7–91.8 feet). Evidence is patchy for some, but there is lots of support for the MWP 1D event, gathered from changes in coral reefs and sediments. That abrupt sea-level rise occurred about 7,600 BP and involved a rapid sea-level rise of 6.5 m (21 ft) in the Caribbean and 4.5 m (14.7 ft) in the Baltic.

The abrupt sea-level rise of 14–17 feet would be devastating to densely populated coastlands. Further, Briner et al.'s simulations of further mass wastage predict that if global warming continues unchecked, unless greenhouse emissions are cut, the 6,100 billion metric tons might sharply increase to between 8,800 and 35,900 metric tons before the end of the century.

The first 1,500 years of the Holocene experienced rapid changes in moisture supply and biomass. Sea levels resulted in marine inundation across the extensive continental shelves, and then the creation of deltas as the rivers dumped their silts into the waters. People were forced to adapt, to migrate away from the coasts, to become dependent on domestic animal and plant life.

Gross ice loss from the glaciers is not the only driver of sea-level change: rock uplift, ocean volume, changing ocean temperatures, and wind patterns have some effect. But most of those are minor in comparison to ice wastage. The Early Holocene was survivable because humans were sparsely spread about the planet and could move and adapt to changes as they arose. We moderns have 7 billion people, many millions of whom live in coastal areas.

Save the planet? No—the planet would get along without humans very well. Active attention to global warming including the reduction of greenhouse gasses is required to save the people on it.