The ancient Egyptians made literally millions of animal mummies, mostly between about 680 BCE–350 CE, the Late Period and Greco-Roman eras. In August 2020 British archaeologist Richard Johnston and colleagues published the latest in several decades of steadily improving scientific studies using a form of high-resolution x-ray. This Background Check examines the history of research into Egyptian animal mummies. 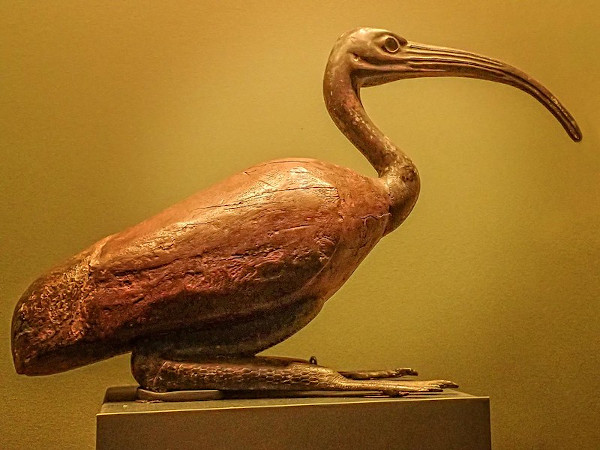 Excavations uncovered many millions of ibis mummies in the Saqqara catacombs alone. This bronze and wooden coffin from the Late Period (332-30 BCE) was photographed at the Smithsonian National Museum of Natural History in Washington D.C. by Mary Harrsch in 2015.

Johnston and colleagues at Swansea University used high-resolution scanning techniques—laboratory-based x-ray microcomputed tomography and focused imaging—to look into three different animal mummies: a bird, a cat, and an oval package with an unidentified animal inside. Without opening or otherwise harming the wrapping, the team was able to ascertain that the bird was likely a Eurasian kestrel; the cat was a domestic kitten, aged younger than 18 weeks and purposefully strangled; and the oval mummy held an Egyptian cobra, which had been ill-treated before its death. 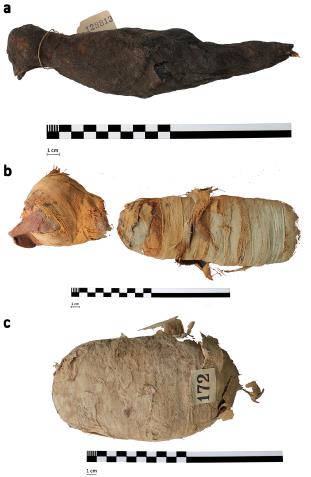 Animals mummified by ancient Egyptians include dogs, cats, cows, donkeys, sheep, horses, monkeys and baboons, fish, lizards, crocodiles, ibises, gazelles, shrews, snakes, raptors, and even elephants. They were interred with their owners, as offerings in temples or pharaoh's tombs, or in one of several dozen animal cemeteries in Egypt. (By the way, Camille Berruyer and associates published a study of a complete crocodile mummy earlier this year; the report is freely available from PLoS ONE.)

Egyptian archaeologist Salima Ikram divides the types of animal mummies used by ancient Egyptians into four groups: Beloved pets, living avatars of the gods, sacrifices to the gods, and food for the pharaohs. Although there is some overlap, different animals were used in the different categories, and the practices took place at different times over the length of the 3,500 years of the dynastic Egyptian civilization.

Where are They Now?

Animal mummies, particularly cats, were immensely popular with tourists—indeed in the 19th century if you didn't bring back an animal mummy, your friends didn't believe you were in Egypt at all. Today they are scattered in small regional museums around the world, although there are study collections at the University of Manchester and the Cairo museum and others, including examples excavated or collected by 19th- and 20th-century Egyptologists.

Excepting those collected by the odd tourist, animal mummies were not especially prized by collectors, however, and many ended up as fertilizer or fuel for fires.

Studies such as the one made by Johnston and colleagues are in general conducted on the collections and investigated using primarily if not completely non-invasive methods. Non-invasive methods—studies that don't involve unwrapping the mummy—began with the invention of the x-ray: the first radiographs on mummies occurred in 1896, a few months after Wilhelm Conrad Roentgen discovered x-rays.

Modern scholars use ever-increasingly enhanced x-ray and CT scans: the Johnston paper included quite high-resolution images such as this one of the cobra, which allowed the researchers to recognize the species, the way the cobra died, and the fact that it was not kept in particularly good health during its life. 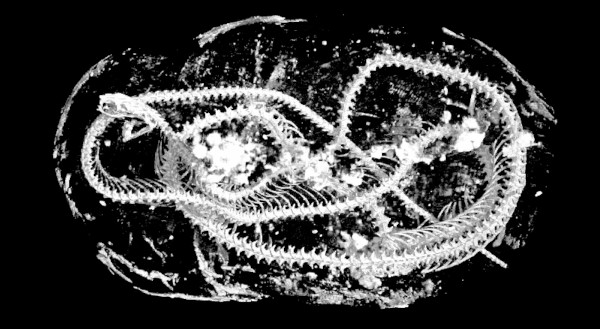 High-resolution 3D scan of the mummy of an Egyptian cobra. Credit: Swansea University