Origins of the Hyksos

A new strontium isotope study sheds some light on the origins of the Hyksos, rulers of ancient Egypt in the Second Intermediate period (1638–1530 BCE). 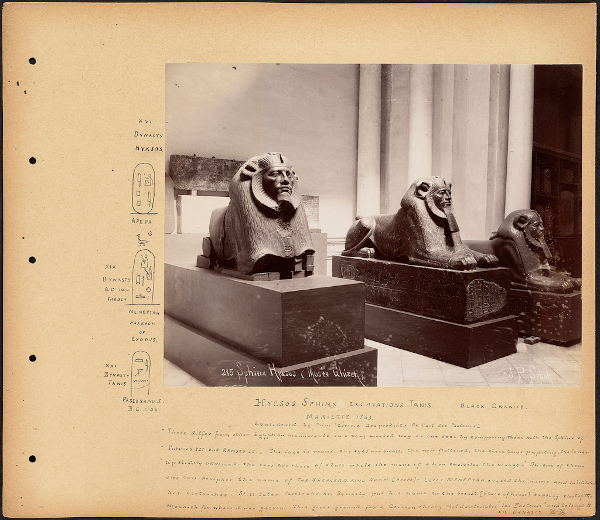 
What is the Second Intermediate Period?

Historians traditionally break the 2,700 years of the ancient Egyptian civilization into three big chunks when the country was united and more or less peaceful: The Old Kingdom (2686–2160 BCE) when the pyramids at Giza were built; the Middle Kingdom (2055–1650) when not very much happened; and the New Kingdom (1550–1069), the glory days when Tutankhamen and Hatshepsut and Ramses all ruled. In between (as well as before and after), the Egyptian idea persisted, but the country fragmented and foreigners reigned over the population. During the glamorously named "Second Intermediate Period" (SIP), it was the turn of the Hyksos.

The Hyksos (sometimes spelled Heka Khasut or Hikau Khausut, which means something like "rulers of foreign or mountainous regions"), was the chosen name of an immigrant community of Aamu, translated as "Asiatics." They ruled Egypt between 1638 and 1530 BCE until they were driven out by the last ruler of the 17th dynasty, who established the 18th dynasty as the New Kingdom. The Hyksos were thought to originate from somewhere in the Levant: Syria or Palestine, or maybe Lebanon, and they arose in power from their colonies in the eastern delta region of the Nile River.

The Aamu established a foothold in Egypt at the harbor town of Avaris on the Nile river some 30—40 km from the Mediterranean beginning in the late 12th dynasty (1991–1783 BCE). Trading with Palestine, the Levant, Mesopotamia, and Cyprus, the Aamu are known to have dealt in chariots and horses, ships, timber, gold, lapis lazuli, silver, turquoise, bronze, axes without number, oil, incense, fat, and honey.

Their largest colony was at Avaris, known as Tell el-Dab'a, a port city in the delta region of the Nile that in its heyday covered an area of about 4 square kilometers or 1.5 square miles. Avaris had a large citadel on its western edge near the river, a watchtower guarding the river approach, extensive gardens, and an enormous wall that enclosed the city, 6.2–8.5 meters (20.3–27.9 feet) in thickness.

During the 12th and 13th Egyptian dynasties, the Aamu built or occupied several towns in the delta, Farasha, Tell el-Sahaba, Bubastis, Inshas, some of which were laid out using elements of those of the Levant, including burials which were located within the settlements, not in separate cemeteries.

Avaris itself was first founded by Egyptians, and the new immigrants intermarried. Aamu culture was thus "peculiarly Egyptian," a distinctive blend of Syro-Palestinean and Egyptian material goods and architecture, and importing some new gods while still honoring and/or assimilating Egyptian deities such as Seth. Archaeologist Manfred Bietak refers to them as Canaanites; the name "Hyksos" was one the people themselves adopted for the blended community of Canaanites and their Egyptian relatives.

Together, they arose in the unstable times of the SIP and took over the Egyptian rule at Memphis and Heliopolis, beginning the 15th dynasty. Were the Hyksos who took over Memphis driven by an influx of foreigners, or were they just the locals driven to act when the government had failed?

How stable isotope analysis works is a long and involved story, but essentially, animals including people absorb chemical signatures from the food and water they consume; those chemical signatures are permanently stored in bones, teeth, and hair. People who lived along the Nile river and consumed plants share the chemical signature of the river whatever their ethnicity. Doesn't matter who you are: you are what you eat. Teeth are particularly useful because they build up what are essentially tree (er, tooth) rings of data over the life of the chewer.

In a PLOS report of 15 July 2020, archaeologist Chris Stantis and colleagues looked at the stable isotopes of strontium (87Sr/86Sr) stored in the tooth enamel of 75 skeletons of elite people buried in Avaris in non-Egyptian tombs. They found that during the 12th and 13th dynasty most of the people buried in the at Avaris were not from the Nile region; but during the 15th dynasty Hyksos rule in the rule of Egypt, all of the males were from Egypt, but many of the women were not: 77% of the women studied were from elsewhere. The city of Avaris, as a harbor city, did have an international flavor; and the cluster of immigrants women shows a fairly broad variety of strontium isotope balances in their teeth.

What Stantin and colleagues argue is that the people who conquered Memphis and Heliopolis were locals, albeit the children of immigrants, confirming a suggestion by several historians, including archaeologist Manfred Bietak, who also suggested that male leaders married with nonlocal women. Beitak in fact suggests that the women were Canaanites, but this study cannot confirm that.

The Return of the (New) King(dom)

After about 150 years, and after several battles, the Hyksos were ejected from the thrones of power at the start of the New Kingdom.

Although they were ultimately defeated, the Hyksos are credited with bringing several new technologies to the Egyptians, particularly in the fields of art (Minoan wall painters), literature, craftsmanship (faster potter's wheel), and weaponry (bronze arms, chariots and ship-building). The Hyksos pharaoh Apophis saw that several old manuscripts were copied and preserved: the Ebers, Smith, and Hearst papyri on medicine, the Rhind papyrus on mathematics, mythology in the Westcar and Amduat papyri, and administrative structure in "The Duties of the Vizier." The so-called Book of the Dead was created at this time as well.

Höflmayer, Felix. "The Expulsion of the Hyksos and the End of the Middle Bronze Age: A Reassessment in Light of Recent Chronological Research." Journal of Ancient Egyptian Interconnections, vol. 21, 2019, pp. 20-30.