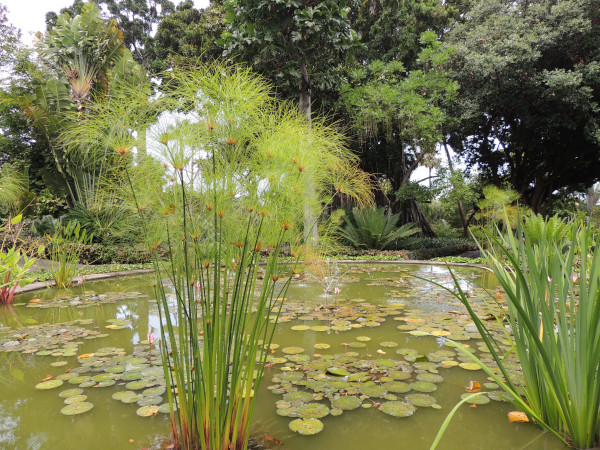 Papyrus is where we get the word for paper, and it was one of the earliest forms of organic writing material used on the planet. But that is only a tiny bit of what the plant is good for. This image is of papyrus growing at the Jardín Botánico del Puerto de la Cruz, Tenerife. Photo credit: Cyril Nelson.

Papyrus (Cyperus papyrus L.) is a freshwater reed which belongs to the Cyperaceae family of sedges. It has no leaves, but typically grows to a height of between 1.5–4 meters (5–13 feet), and when fully grown is topped with a bushy cluster of fine thread-like strands that end in tiny flowers. Its stem is triangular in cross-section; the stem measures five to eight centimeters (2-8 inches) wide at the base and tapers to a point at the top. The interior of the stem, called pith or parenchyma, is a cream-colored fibrous mass with a spongy texture of honey-combed cells and parallel woody or ligneous fibers.

Papyrus grows today in isolated swamps and wetlands throughout arid parts of the Mediterranean. During the Early Bronze Age of about four thousand years ago, farmers of the Egyptian and Mesopotamian civilizations deliberately cultivated papyrus within the floodplains of the Nile and the Euphrates and Tigris rivers. Papyrus was never truly domesticated: it is still able to grow and reproduce without human intervention. Cultivation of papyrus, however, requires management, including bans on burning, rotational harvesting, seasonal harvesting, and weeding to control other intrusive plants.


Papyrus is probably best known for its use by various Bronze Age societies for the production of paper, but it was also used for other purposes, such as making boats, sails, mattresses, mats, blankets, rope, sandals, and baskets. In our modern-day, people use it to build houses, as fuel for fire, fodder for animals, sleeping mats and roofing, and as medication. In ecological terms, papyrus is studied today for its ability to trap sediments and keep pollutants from entering water bodies in wetlands.

The oldest written papyrus comes from Egypt, about 2400 BCE. Beginning about the fourth century BCE, papyrus use spread into the Greco-Roman world, and it only declined after about the 7th century CE, when parchment, made from treated animal skin, and rag paper, developed in China and brought to the Mediterranean via the extensive Arabic trading network, became readily available. Rag paper is the precursor of our modern reports, but the word paper comes directly to us from papyrus.

Papyrus rolls and fragments have been found in caves, tombs, middens, and mummy casings: essentially, it is preserved in micro-climates where low temperatures and humidity are combined with a relative lack of insect life. Most surviving papyri are written in Greek, but a large number have been found in Latin, Egyptian, Aramaic, Persian, and Arabic. An enormous collection of about 200,000 papyri covering nearly 1,000 years was recovered from the Egyptian site known as Oxyrhynchus ("Waste Paper City") where a veritable library of Egyptian, Hellenistic, and Roman writings was discovered in a midden deposit (i.e., a trash dump).

In the first century CE, the Roman writer Pliny the Elder described how to make paper, albeit in fairly vague terms. Archaeological investigations through the latter part of the last century have revealed additional details. The process begins with harvesting the thickest part of the papyrus stem into segments of between 20–30 centimeters (7–12 inches). The outer rind is peeled off, and the pith is cut into strips. These strips are laid out side by side; a second layer is stacked on top of the first, at right angles from the first layer. Water (from the Nile, says Pliny) was added, and the whole mass was beaten or pressed to form a single sheet. It is possible that salts and aluminum in Nile water sediments combined with the natural gums in papyrus acted as an adhesive. The sheet was then allowed to dry. The individual sheets of paper were then joined together into rolls using a starch-based paste to attach overlying edges, and the whole surface was prepared for writing by a wash of egg, gum, and/or milk. A typical roll took about 20 sheets.

In some cases, the papermaker peeled out the pith with a needle, producing large flat sheets that could be then pressed together. This method had to be reinforced with the strip method to create a regular size and form.

In 2004, Italian chemist Enrico Franceschi and colleagues described using scanning electron microscopy and optical microscopy to identify evidence of the different manufacturing processes used by Egyptians and Greco-Romans. They found that thermal curves could be used to determine the amount of cellulose and lignin present in a papyrus document, variations that result from different processing methods.

The POxy Project is a research project investigating the translation and study of the papyri from Oxyrhynchus. The preservation of the papyri, enhanced by the latest technology, has allowed researchers to identify new texts from a number of ancient writers; the study of the work has also led to new techniques to obtain reasonable images from which to read the texts. There are so many papyri in the collections requiring transcription that the University of Oxford published the Ancient Lives website, where the Oxyrhynchus texts are online and you can help transcribe them.

Some scholars have argued that papyrus made up a portion of the diets of our human ancestor Australopithecus boisei. Archaeologist Nikolaas Van der Merwe and colleagues point to the stable isotope analysis of A. boisei tooth enamel, which suggests a substantial dietary input from C4 species, and papyrus certainly fits that bill and would have been available. While chewing the raw cellulose that makes up the bulk of papyrus stem doesn't sound like a terrific treat to modern human beings, apparently, we can digest it. Yum!

Whether papyrus would be tasty to modern palates or not, the material is still useful as a natural water filtration system, and as biomass, such as ethanol out of maize. Papyrus is used today and could be more widely used in many tropical wetlands as a biofuel for cooking and heating, given a properly integrated management system.


This article was originally published on About.com in January 2012, as
http://archaeology.about.com/od/pathroughpd/qt/Papyrus.htm
and was deprecated from ThoughtCo in February 2018. Like other articles recovered from About.com and ThoughtCo, this article has been updated and added here on WasteFlake.