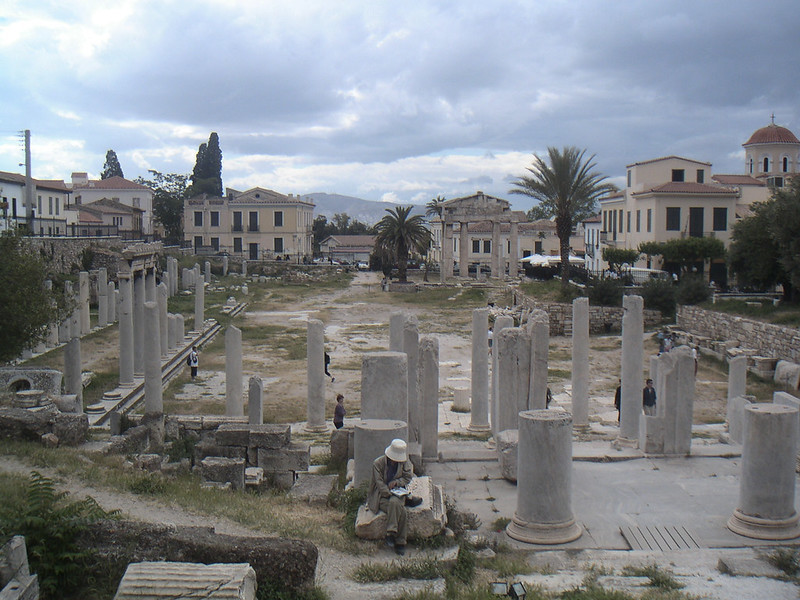 Most prehistoric and even modern-day communities have plazas, shared gathering places where markets are held, where ritual and political events are held, where rulers speak to their subjects, where festivals are shared by everyone. Games, dances, worship, social interaction, funerals: all of these and probably hundreds of other public functions were and are held in plazas all over the world. Plazas, patios, city parks, college quadrangles, rialtos, agorae, and piazzas are a few of the words associated with a shared open space. Above is the Roman agora, built near the older Hellenistic agora in Athens, Greece. Image credit: Erik Hermans (2010)

Çatalhöyük in Turkey, arguably the world's first city occupied between 7400-6000 BCE (PrePottery Neolithic period B (PPNB)), did not have an open space within its tightly cramped apartment block: researchers have suggested that its rooftops acted as a plaza. Other, slightly later PPNB communities such as Çayönü do contain the first evidence of deliberately constructed open spaces.

Open spaces range in size from tiny to enormous, and archaeologists have discovered that at least in this case, size does matter: although plazas serve similar functions, they vary in the percentage of people in the community that could attend those functions, and so different sizes have slightly different meanings to the community.

Patios (also called courtyards) are areas set aside for household activities, for the use of a private residence or a family compound. They are marked by buildings and features associated with domestic uses. Patios are intimate settings for small groups that provide marked space for craft production or family meals.
Plazas (called forums, squares, market places, or even quadrangles on college campuses) are typically the focus of community-wide religious and political rituals, and they tend to be larger and more socially inclusive than patios. Plazas are often used for a wide spectrum of both secular and sacred activities, some of which were and are critical to the organization and operation of the larger community. The main plaza of Mexico's capital city is called a "zocalo," a Spanish word ultimately derived from the Latin socles, meaning "plinth," a pedestal. In 1843 the Mexican government began construction on a monument to Mexico's independence from Spain. Only the plinth was ever built, and eventually, the whole square became called that. The zocalo in Mexico City was originally built in the 15th century by the Aztecs for their capital Tenochtitlan, a pattern in evidence in central plazas in numerous ancient cities. The European conquistadors of Tenochtitlan did their best to remove all the Aztec temples, but they kept the main plaza where people congregated. This image is a detail of the 16th century Uppsala Map, likely drawn by indigenous students at the Colegio de Santa Cruz, the first and oldest European institution of higher learning in the Americas.

The Architecture of Public Spaces The boundaries of open spaces are marked by the arrangement of buildings or earthworks surrounding them, and sometimes a series of stone lines along the edges defines a space, sometimes low walls serve that purpose. Some plazas are built next to temples, which Inomata argues allows the assembly of an audience for staged ceremonial performances at the temple.

Most plazas appear to be devoid of structures, although some do include posts, pit features, and buildings, which may represent temporary buildings such as market stalls. The permanent structures may also have served as part of the shared activities of the community, e.g., public shops rather than private homes.

However, sometimes spaces identified by size as civic-ceremonial plazas were actually large residential patios for elites. Sometimes open spaces in settlements are subject to multiple uses over time as power balances among ruling families shifted between generations. In most cases, plazas were kept swept clean of debris, to keep them open and safely available to large amounts of people. So how do archaeologists know what went on in a place that was kept clean or changed purposes over time?

Since the late 20th century, archaeologists have used soil chemistry to identify activities within plazas. High concentrations of soil phosphorous (indicating the presence of organic material) have been used to identify middens; plazas typically have comparatively low-phosphorous levels. However, higher levels have been identified in patches within plaza spaces, and these may represent areas where food preparation and consumption at feasts occurred.

For example, geochemist Kara Fulton and colleagues used soil properties (the presence of organic matter, pH levels, and chemical concentrations) in combination with artifact assemblages in an attempt to identify domestic versus public spaces. They found that both large and small plazas at the Maya center of Palmarejo in Honduras appeared to have multiple uses, including feasting and incense burning; but the largest plazas had discrete activity areas where those things took place.

Many ancient plazas continue to be used in the modern-day, sometimes covered by concrete, and not available for excavation; investigations in these places are often assisted with remote sensing techniques. The main square at Cusco and the Incan world, the Plaza Armas of Cusco. Image credit: Guillén Pérez.

As you might imagine, there have been many, many investigations into plazas all over the world. although they are rarely the sole focus of an investigation. Here's a sample of some recent studies.


This article was originally published on About.com about July 2014, as
https://www.thoughtco.com/history-of-plazas-patios-169515
and was deprecated from ThoughtCo in 2017. Like other articles recovered from About.com and ThoughtCo, this article has been updated and added here on WasteFlake.