From the novel 'Light' by M John Harrison: Their antics could often bring her out of her recurrent cafards...
So, what's a cafard when it's at home with its trousers off? Well, look it up, I'll wait. 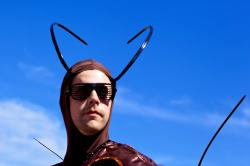 Is this fellow having a cafard?
My favorite is from Merriam-Webster cafard: severe depression or apathy — used especially of white people in the tropics. Neat, a term for depressed imperialists. Plus, it's pronounced kafar; the swallowed d suggests we swiped it from the French.

What does it mean in French? It means cockroach! In my life I have experienced recurrent cockroaches and it was annoying but not so much depressing.

Avoir le cafard
I've read that this expression means "I'm down in the dumps" as much as it means "I've got a cockroach." And, that the origin of the turn of phrase is attributed to Baudelaire in "Les Fleurs du Mal." In particular, it occurs in one poem: La Destruction. The stanza in question is:

Both English translations on "Les Fleurs du Mal." translate cafard as hypocritical. So how does that lead to 'avior le cafard' meaning depressed? The etymology of cafard is given as from kfir Arabic for infidel. Who can tell; language is a funny old business.

In a nearby rabbit hole, we see a reference to "Max Cafard". That will be the subject for another TravelsDownTheRabbitHoleWithSteve